So I started blogging about our school weeks and got behind. I’m in a wedding this month and planning some other events both for church and our co-op so I got a little thrown off. Not to mention I still have to work and do school with my girl here at home.

We’ve kept pretty busy during weeks 3 through 5. Studying Ancient Egypt and Mesopotamia as well as China. We’ve been working on a closed bottle Science experiment for Biology which has been thriving. When we left our co-op we had 2 fish and 1 snail. By that evening we had 6 fish and 1 snail. The following morning we could only find 5 fish and 1 snail. Apparently one of our fish was pregnant. However, My mini me did an awesome job picking out the perfect environment or her creatures. Each student got to pick their environments and thus the point of the experiment. We needed to be able to keep the creatures alive without having to feed them ourselves.

Mini Me chose the following ingredients to make a suitable home for her environment: Lake water, dirt, rock with algae, plants and set it in a place where it gets partial natural sunlight. I guess those ingredients were the perfect fit for her tiny fish and snail. She named the fish but as she chose Japanese names for each of them I can not tell you what they are.

We are working on Algebra 1 in math and it makes my brain hurt a bit. But we are pushing through. We’ve been walking and exercising daily so she gets her PE time in. We’ve also been reading quite a bit about early American history on the side.

I borrowed a book from the library about the Lost State of Franklin. It’s been interesting but because it is set up as a “text book” it can get a bit boring. So I read it as much as I can at night until I fall asleep. Of course the book was written in the 1920’s so it can be monotonous.

Like I mentioned early we have a wedding this month that we will be in so we’ve got lots going on, so, if I forget to post on Monday about week 6 you will know why.

Also I want to share with you a picture I took this past week. I was kind of proud.

And on September 14th (2 days after our 21st wedding anniversary), Hubby and I renewed our vows. It was a surprise to me and the first time in the 22 years that we have been together that he was able to pull off a surprise. 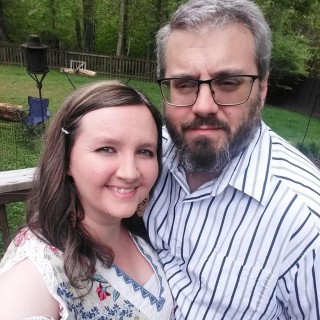 A homeschool mom of 3 girls (2 have now graduated). I have a love for photography, books, music, shopping, chocolate and coffee. I'm a devoted follower of God and a lover of His Word. Married to my best friend for 20+ years. I desire to be the woman that God intends me to be.